20 years - and a big leap (Evolution of British uniforms)


The period between 1792 and 1812 saw Britain nearly constantly at war with Revolutionary and Napoleonic France. Nevertheless Top Brass in Horse Guards found time to change uniforms.

They started with the lapeled long-tailed coat reminiscing of the Seven Years War and the American Revolutionary War, tricorne hat, breeches and gaiters and the soft back-pack of the envelope pattern often painted in the facing colour (figures on the left from Revell).

Around the turn of the century the coats were shortened and closed with the lapels removed, trousers loose and white, the first shako model of the stovepipe pattern. The pack colour was changed to generally black and stiffened by wooden parts inside. That was the look of the British infantry at the beginning of the Peninsular War (figures second from left - HÄT).

Till 1815 the changes affected the shako (Wellington or Waterloo pattern with false higher front) and the trousers, which generally became grey (figures second from right - Airfix).

The two figures on the right take us to the 20th century - Grenadier Guards of the 1960s. one of the first Airfix sets. Appearance and weapons had changed dramatically: red tunic, dark blue trousers and the high bearskin cap (by the way - they are still made from Canadian bearskins, no other material being suitable for the special needs; re animal rights activists: there are so many black bears in still growing numbers that they can easily provide the Foot Guards with their headgears). 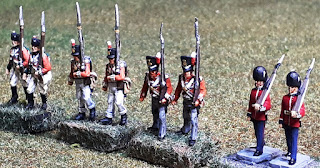 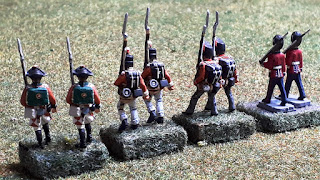 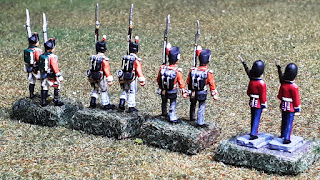