In the first years of the second Punic war (218 - 201 BC) the Carthagian army under the command of Hannibal won several battles (Trebbia, Lake Trasimene, Cannae) with a terrible death count for the Romans. Only when they adapted their strategy and learn from their errors the Romans were able to turn the tides of war. After successes in Spain they finally landed in Africa to bring the war to the Carthaginian homeland. Hannibal was recalled from Italy and took command of the army, his Roman opponent was Publius Cornelius Scipio. The armies clashed at Zama in the year 202 BC. The Carthaginian army was superior in numbers, but consisted mainly of raw troops - the Romans war seasoned and highly disciplined troops and were supported by Numidian cavalry (before an essential ally and a major factor in the Carthaginian tactics), Hannibal started the fight with an attack by his war elephants but with little effect and than a terrible close combat between the two armies began. On the flanks both cavalry formations clashed and the Carthaginians were thrown back. The same tactics that  Hannibal used at Cannae were now effectively carried out by Sicpio and his cavalry attacked the Carthaginians from the rear. That was the final blow and the remaining Carthaginians fled the field of battle. Scipio received for his victory the agnomen Africanus, Hannibal was on the run and left Carthage - he died between 183 BC and 181 BC (the causes are much debated and range from assassination, suicide with poision to fever after an accident)
The moment depicted is the attack of Hannibal's elephants against the Roman battle lines, the were supported by some light infantry. The Roman light infantry on their turn tried to kill the beasts or to confuse them as much as they would turn in panic. They Romans succeeded in this and the remaining elephants who effectively broke through the light infantry simply run through the gaps of the Roman formations without making much damage.
The diorama

The figures are from Zvezda and especially the elephant derserves a seperate praise - perfect work! I added a little detail in creating a convincing throat (otherwise it looks like an unrealistic hole), some small gaps between the parts have to be covered with putty. The real problem was a quite realistic colouring of the elephant. I tried many different colours and I really can't tell how I finally achieved this effect (black, light grey, dark grey, khaky, medium brown, dark brown - in several layers, partly only drybrushed).
The majority of Hannibal's elephants were young African forrest elephants, much smaller than the Zvezda specimen and most probably without towers. This exemplar is an older Indian elephant (there were a few available) with a tower. The mahout in front of the tower controls the movement of the elephant and the fighting crew tries to shield the flanks of the beast. Additional light infantry also has this job. The main function was the sheer might and weight of the elephant to disrupt the enemy lines, but it isn't possible to steer the animal directly into a wall of soldiers with spears to their front - the elaphant simply stops or even worse he got afraid and turned and crashed blindly through his own soldiers. A scared elephant is hard to stop and the mahout carried a hammer and a chisel blade for this moment - to ram it down through the forehead of the animal as a final solution.
Actual pictures of the Zama region shows this rather redbrown soil as the more often seen desert colours in paintings.
Photos (click to enlarge) 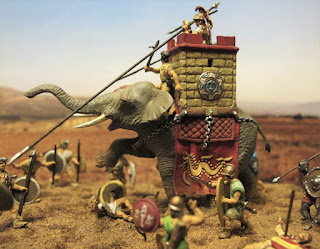 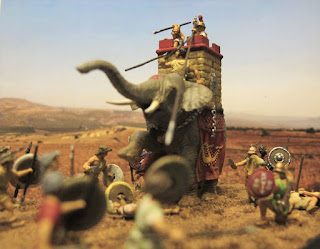 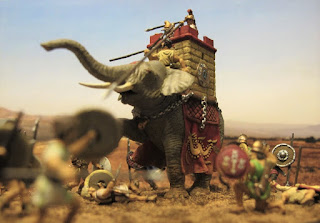 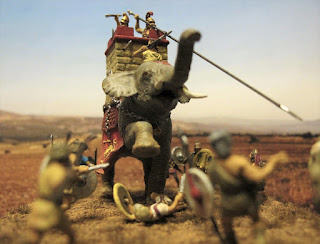 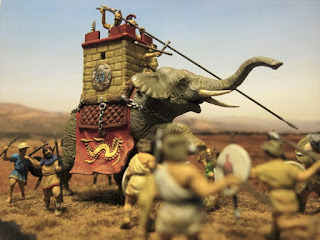 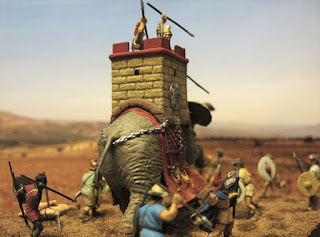 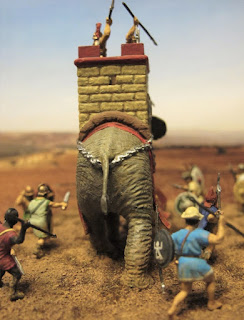 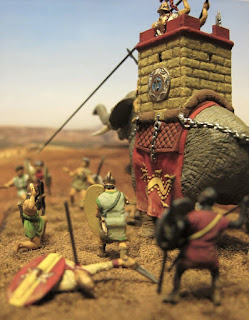 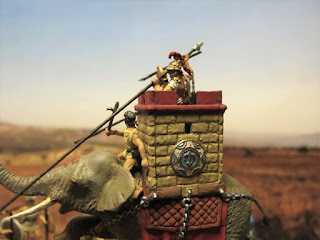 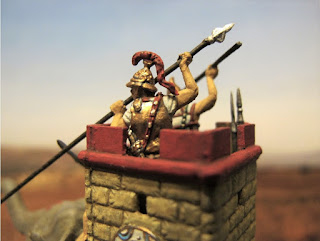 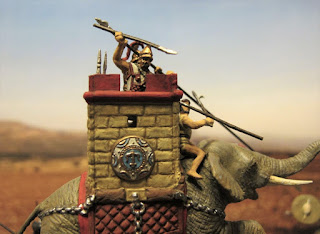 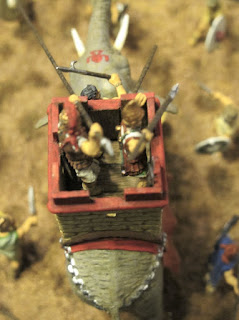 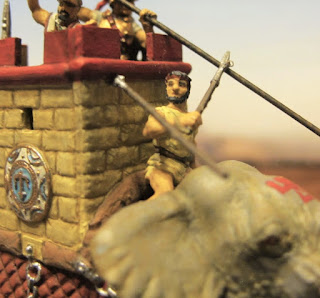 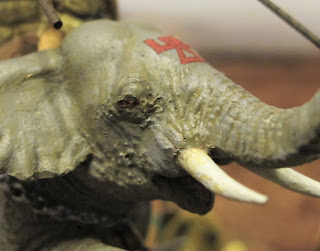 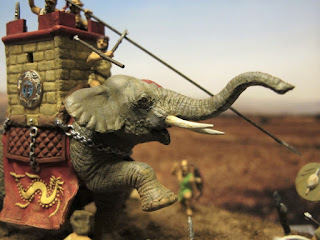 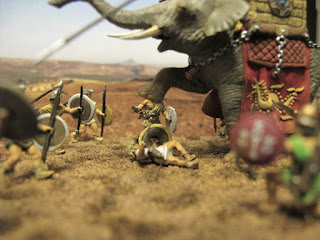 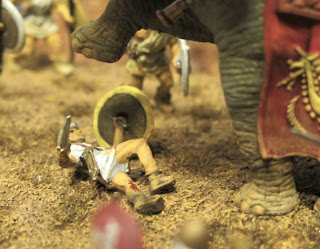 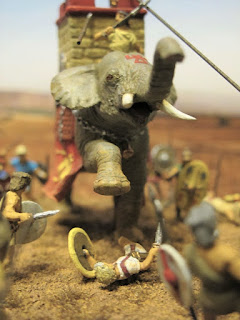 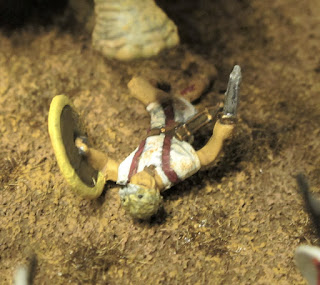 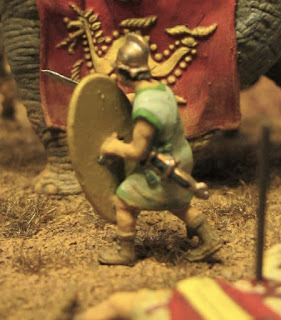 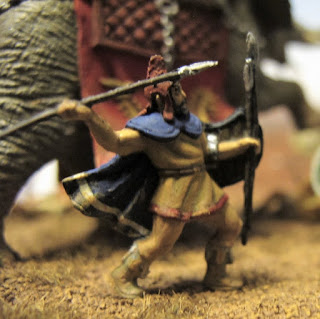 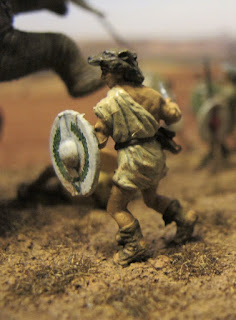 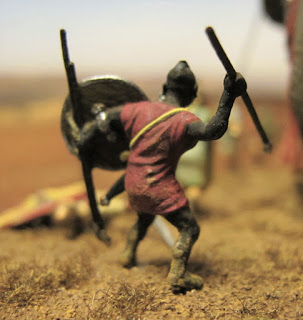 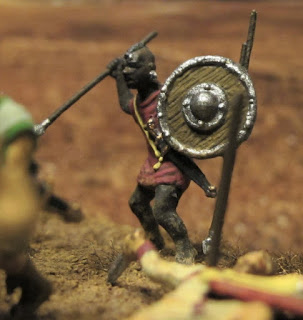 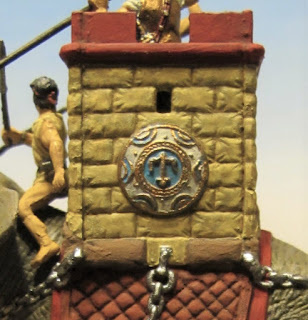 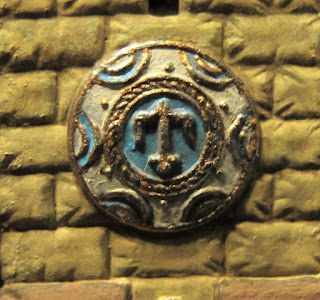 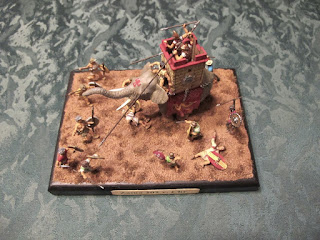